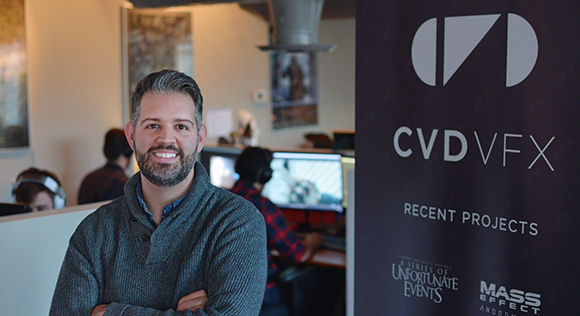 1. Hi Chris!  You’ve got an impressive resume when it comes to VFX and compositing, i.e. work on Harry Potter and The Hobbit to name a few! Can you give us a quick rundown of your background and the journey that lead you to forming CVD VFX?

Thanks so much! Looking back, I’ve always chased projects that were stylized and full of artistic problem solving. Some other highlights would be 300, Tron, and Warcraft. After about 12 years of working in new cities and a lot of long hours, I was trying to find a life balance that allowed me to be challenged daily and still be home for dinner with the family. I thought it would be a good idea to try and work from home! After a quick attempt to work freelance, I found a lot of really exciting projects started to come my way and I needed to form a team. About a year and a half ago, I hired two students and colleague from a past studio and we hit the ground running. Our first project was to help with the announcement for a large EA game and a feature film that won best VFX for the Leos. We quickly expanded to a solid crew of 10 people!

2. What makes CVD VFX unique?  How do you differentiate yourself from other VFX studios?

For me, it’s the culture.  We have a really passionate and fun team. I’ve never really experience anything like it – we’re all really close and we’re a seamless crew! On the service front, we’re the only company specializing in Compositing. We’re able to bring feature film quality work to virtually every project we touch. I think that’s mainly because as a company, we don’t have a lot of overhead and we’re never racing against the clock.

3. Without spilling trade secrets, are there any exciting new developments within the VFX industry that are making the viewing experience even better for audiences?

We’re definitely having fun playing with VR but the application is still fuzzy for me. I think it’ll be a while until that becomes a constant stream of work for us. Either way, another taxing change is the resolution. Most projects coming in are at 4K and the plates look amazing.

4. How can BC continue to capitalize on the recent exposure and success that VFX studios and industry professionals have enjoyed both at home and abroad?

I think we need to continue to train and educate our upcoming artists and students. Unfortunately, most artist’s first opportunity is a short term contract that is basically a sink or swim scenario. If we can offer extra curricular classes, like what Spark and the VES are doing, I think it’ll make Vancouver a stronger hub.

5. Why do you think BC has emerged as a preferred location for post-production and VFX?

It’s funny, I never would have been able to predict it! I started in 2003 and it was all episodic work amongst a handful of studios. There has always been an amazing force of talent here combined with the tax credits, dollar and timezone – it seems to be a perfect fit. Even though the talent has grown and there are thousands of artists, it seems like there are never enough people!

6. You’ve recently been working on the much anticipated Netflix series Lemony Snicket’s A Series of Unfortunate Events.   Can you tell us a bit about this experience and your involvement in the project?

The experience was great – it’s a super stylized world and that’s right up our alley. In the trailer, there’s a shot of an old fashioned ship and we’re super excited to showcase it in our portfolio. A side from that, there’s not much I can say… I will say it was a giant effort split up between several studios. We completed around 80 shots.

7. Any other projects you are working on that we should be getting excited about?

I’ll have to be vague but our continued work with BioWare on Mass Effect: Andromeda has expanded and we’re excited to be a part of some pretty exciting top secret work there. Otherwise, we have a great variety of episodic, game cinematics, and film work slated for 2017. We’re just prepping our submissions for the Leo’s so stay tuned, as we’re hoping to walk away with another win for ‘Best VFX’.

My advice would be to specialize and try to find a first job that you feel you will learn the most from. It’s hard to not gravitate towards the larger studios but  I learned so much at my first job at a small office! Also, if you were to demonstrate one quality, it would be that you are a creative problem solver.