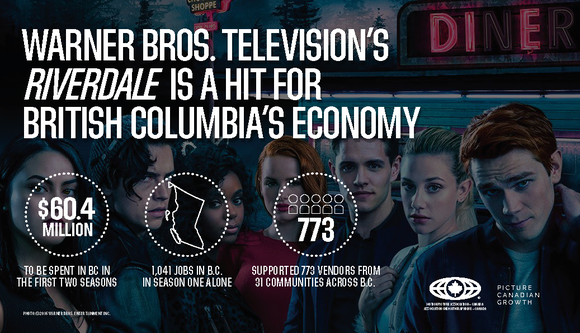 The report by Canada’s MNP LLP examines the first season of the Archie Comics reboot to assess the economic impact of two seasons of production. The report estimates that the combined spending in B.C. in the first two seasons of Riverdale totals $60.4 million. Riverdale’s first season alone created 1,041 jobs, with total spending in the province of over $22.4 million. B.C. production crew and other labour received 75% of the total B.C. expenditure, while the remaining 25% was spent on purchases of B.C. goods and services.

British Columbians who tune into Riverdale will see plenty of familiar locations, as the series shot in 31 communities across the province. Vancouver’s Strathcona and New Westminster neighbourhoods provided homes for Archie and Betty, while Lord Byng, Point Grey, and John Oliver Secondary Schools have each played the part of Riverdale High. Nearby Alouette Lake took on the role of Sweetwater River. Outside of Vancouver, production took place in 15 B.C. communities, including Maple Ridge, Mission, Fort Langley, and Burnaby.

“Locating Riverdale in Langley has provided access to a host of great untapped locations, which has added to the look of the show,” said producer Connie Dolphin, “we look forward to a season 2 in British Columbia.”

“More than 600 of our professional artists and technicians are thrilled to see their work on Riverdale hit the screen,” said Phil Klapwyk, IATSE 891 Business Representative. “Productions like this prove that great jobs for average British Columbians are a crucial part of the creative economy.”

“We’re very proud of the collaboration that delivers Riverdale,” said Prem Gill, CEO of Creative BC. “Warner Brothers, our skilled industry workforce and the locations and communities that host the show all contribute to make B.C.’s motion picture economy successful.”

“Riverdale is not only an enormous hit with viewers, it is a huge success for the B.C. economy said Wendy Noss, President, Motion Picture Association-Canada. In its first season alone, Riverdale spent over 22 million, engaged 773 vendors from 31 communities across B.C., and has resulted in spin-off tourism benefits for the province as fans flock to iconic locales across the lower mainland.