B.C.’s Motion Picture Industry Contributes $3.4B to the Provincial Economy 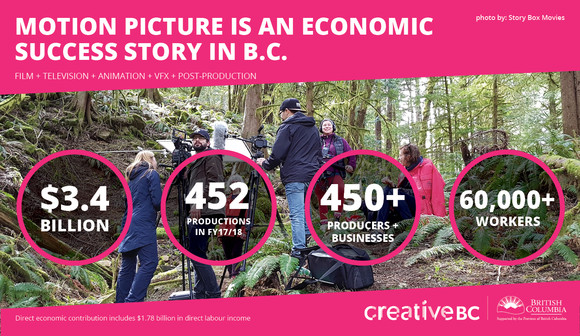 British Columbia possesses a reputation for excellence and innovation in screen-based media production globally, and motion picture contributes to a strong and sustainable economy for the province. Spanning physical production, animation, visual effects and post-production, B.C’s full-service industry is a major private sector employer supporting an estimated 60,000 skilled workers across technology, trades, business and the arts with higher than average incomes.

A breakdown by program of the 452 tax credit certifications approved by Creative BC during fiscal year 2017-18 include:

A breakdown by format of the 452 tax credit certifications includes:

“The people working in B.C.’s motion picture industry have earned this province a global reputation for innovation and full-service excellence in the highly competitive screen-based industries. From physical production to VFX, animation and post-production, the positive economic and labour income footprints of motion picture in B.C. are expanding due to industry and government collaboration, incredible talent, world-leading industry expertise and robust infrastructure. Together we are delivering the world’s highest quality content.”

“Together, British Columbia’s motion picture industry continues its leadership position as North America’s third largest motion picture hub. We are proud of our industry’s global reputation for expertise and innovation, and of the contribution we are making to this province’s economy.”

“B.C.’s thriving motion picture production industry presents excellent strategic opportunity for our province’s own producers and creators. British Columbia’s industry is in the global spotlight, and as demand for screen-based content grows, we can leverage our international reputation to increase our domestic creators’ presence at home, nationally and around the globe.”

“The regions of B.C. are much more than a destination for unique locations, thanks to Governments strategic investments focused on growing the creative industries throughout B.C. The current successes can be credited to labour-based tax credits and grass roots rural training programs. Combined with years of hard work and dedication by B.C.’s regional film commissions, job opportunities and private infrastructure investment in motion picture, game and animation is on the rise.”

“Vancouver is proud to be the anchor of the region’s film & TV industry. Thousands of professionals form the bedrock of Vancouver’s world-leading VFX and animation sector, and thousands more comprise the celebrated crews and talent that built global confidence in our city’s capacity to deliver world-class productions. These numbers show that Vancouver and the region remains firmly established as North America’s third largest film & TV production centre, and the largest and busiest production hub in Canada. This success is set to continue playing a fundamental role in Vancouver’s economic future.”

About Creative BC Creative BC is an independent agency created and supported by the Province of B.C. to sustain and help grow B.C.’s creative sector (film and television, digital and interactive media, music, and magazine and book publishing industries). The agency delivers a wide range of programs and services to expand B.C.’s creative economy. These include the administration of the provincial government’s tax credit programs for film and television; development funding and export marketing support; and motion picture production services to attract inward investment and market B.C. as a destination for domestic and international production. The agency acts as an industry catalyst and ambassador to help B.C.’s creative sector reach its economic and creative potential both at home and globally.

Stay up to date with initiatives from Creative BC: