Reel Green had a packed house for its January General Meeting! The focus of the January meeting was on reducing greenhouse gases on production.

Members from across the motion picture industry gathered to discuss Reel Green and how to come together to promote sustainable production practices in our industry.

The conversation was focused on power and how to power productions in a more sustainable way. Topics such as Portable Electric’s products, to converting Sprinter Vans to Lithium powered systems for auxiliary heating and cooling, and the pros and cons of using electric power were discussed. Charlotte Argue from Plug In BC shared that the City will be implementing incentive programs to convert power and put in charging stations (pay back 50% of install cost) within the next 2 months. She encourages  the industry and the public to check out https://pluginbc.ca/ which shows lots of information on EVs available in BC and where to currently plug in. Here’s some information on Plugin BC’s incentive programs; more on their incentives to come at the end of the month. It’s impressive how many Electric Fleet Partners there already are!
Jeremiah Benskin, Director, shared his experience on using electric on his film A Thousand Days of Solitude. He discussed that he and his team committed to not using any fossil fuels, and ingrained this into the crew very early in the process. Some tactics involved not keeping lights on in pre-light and only using lighting for shooting, and plugging into the grid as much as possible; with the new great cameras, don’t need huge lighting setups anymore.
Kieth Woods, Chief Gaffer for large blockbuster films such as Deadpool, shared his thoughts on converting to electric and feels the technology and infrastructure aren’t quite there yet for big productions. However, Woods did indicate that big productions are using more LED’s which reduce electricity consumption; and idling less.
Albert Shuen from Xantrex has been partnering with Truck & RV Companies, converting sprinter vans to Lithium powered systems. This is a proposed solution to idling with approximate costs around $20K to retrofit sprinter vans with a lithium battery.

Overall the key takeaways from the meeting were:

Have questions, thoughts, or opinions you’d like to share? Get in touch with us!  Or join us for the next Reel Green meeting on March 21st. Stay in touch with meetings, news, and events from Reel Green by subscribing to the newsletter. 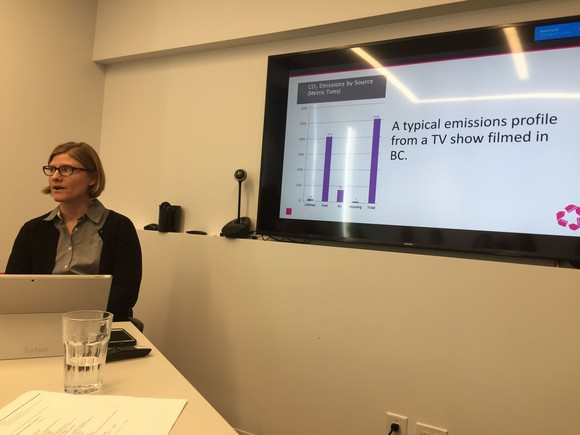