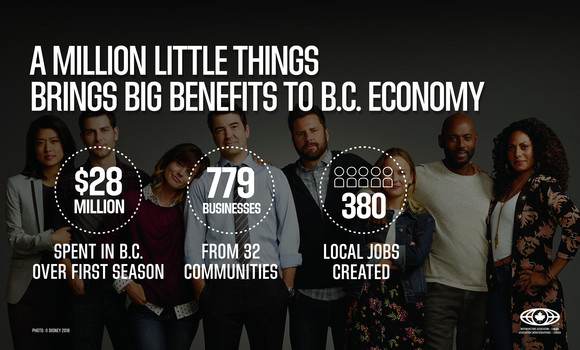 VANCOUVER, BRITISH COLUMBIA – May 1, 2019 – As part of BC's Creative Industries Week celebrations, an economic report released today highlights the impact of  ABC Studios' drama series A Million Little Things on the British Columbia economy. During the making of Season 1, the production spent more than $27 million in-province.

The report by Canada's MNP LLP examines the first season of production, showing A Million Little Things spent over $13 million on goods and services in BC. The production engaged more than 750 local businesses from 32 communities across the province including; production facilities, equipment rentals, dry cleaners, hotels and restaurants, caterers, automobile rentals, alteration and repairs, metal fabricators, florists, party suppliers and waste management services.

Over $14 million was spent on BC production crew and labour, with 380 local jobs created.

A Million Little Things is a drama about a group of friends motivated to live life to the fullest after the unexpected  death of a close friend. For the first  two episodes, the production  used the Pacific National Exhibition (PNE) to double as Boston Garden, home arena to the Vancouver Canucks' NHL rivals, the Boston Bruins. A Million Little Things was one of 65  film and television  projects at the PNE in 2017, helping the non-profit organization generate a record year of more than $1 million in revenue. The PNE's film-friendly policy enables  continued  investments  in its park spaces, events, programs and facilities.

A Million Little Things has been picked up for a second season by ABC. Assuming the level and pattern of production spending remain similar across seasons, the estimated economic impact over the life of the series (i.e., Season 1 through 2) could be expected to total roughly two times that from Season 1.

"British Columbia's experienced cast and crew, beautiful locations and reliable infrastructure tell a powerful economic story for British Columbia" said the Hon. Lisa Beare, Minister of Tourism, Arts and Culture. "Congratulations to the local cast and crew who helped to make A Million Little Things a success, and who continue to build BC's well-earned reputation as a leading hub for film and television production in North America."

"We are very proud of the collaboration that brings A Million Little Things to screens every week," said Prem Gill, CEO of Creative BC. "ABC Studios, the talented industry workforce and utilizing iconic locations like the PNE ensure that BC's motion picture industry is thriving and versatile. We are excited for Season 2 to garner more jobs for the industry and bolster BC's creative economy."

"Over 1,000 professional artists and technicians of IATSE Local 891 helped to create Season 1 of A Million  Little Things.  Our members are so thrilled to see that their  skill and expertise  have contributed to the order for a second season," said Phil Klapwyk, Business Representative, IATSE Local 891. "In addition to offering a creative challenge, the quality jobs created on television productions like A Million Little Things support thousands of families, surrounding communities and BC's economy as a whole. It's a total win-win."

"British Columbia is an important production hub for ABC," said Gary French, Senior Vice President- Production, ABC Studios. "It is BC's skilled cast and crew, diverse locations, sophisticated infrastructure, and incredible wealth of local talent that make shows like A Million Little Things a success. We look forward to filming Season 2 in a province that offers so much support for  the film and television industry."

"The release of today's report demonstrates the incredible economic impact that productions can have across the province and in local communities," said Wendy Noss, President, Motion Picture Association – Canada. "A  Million Little Things is a great example of how just one season of television production can benefit a wide variety of local businesses and create hundreds of jobs for local cast and crew."

*All figures calculated in Canadian dollars

MNP is the fastest growing chartered accountancy and business advisory firm in Canada. Founded in 1945, MNP has grown to more than 70 offices and nearly 3,000 team members. MN P's Economics and Research practice is one of the largest of its kind, and its team members have an established  track record in conducting economic impact and industry studies, including studies involving the film and television production industry.