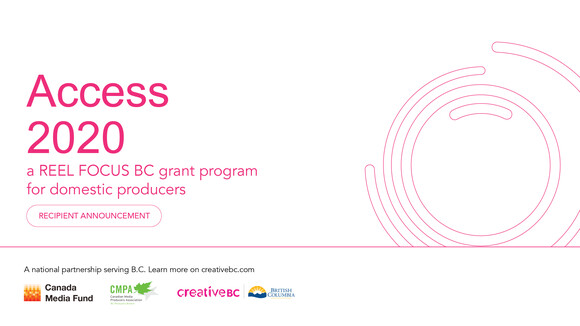 VANCOUVER BC (July 30, 2020) — Creative BC is pleased to announce the recipients of Access 2020, the new program announced earlier this year in partnership with the Canada Media Fund (CMF) and the Canadian Media Producers Association-BC Producers Branch (CMPA-BC). The $420,000 fund is delivering B.C.-based producers up to $30,000 for the early stage development of children’s, youth and scripted drama projects for television.

Access 2020 is part of the Reel Focus BC suite of programs and serves all partners’ strategic objectives to drive the creation of B.C.-based I.P. and support the province’s domestic motion picture industry. This program is the first time the CMF has partnered with a provincial funding body and the CMPA to deliver targeted funds provincially–a testament to the strength and reputation of B.C.’s domestic creators.

The following 14 companies are the successful recipients, and each will receive a grant of up to $30,000:

3.     Big Bad Boo Studios, Billy & The Boingo Band $30,000
Four misfit, flower-power musician monsters, tour the globe in a VW Van, encountering various creatures with problems big, small, or medium-sized. Billy exclaims, “we have to stop!”, Pearl wonders, “Is there enough time?” and they say, “We have to make time to help this one friend!” No matter where their next concert takes them, they are willing to lend a hand. Come on a musical world tour and learn how you can be a helpful friend.

4.     Brightlight Pictures, Banana Boys $30,000
Based on the book by Terry Woo, Banana Boys centres on a group of Chinese Canadian friends and their daily struggles of being not quite Chinese and not quite Canadian. A light-hearted look at what it’s like to be a “Banana”, yellow on the outside and white on the inside.

5.     Cedar Island Films, Containment $30,000
In a post COVID-19 world, a German detective flies to Canada after her daughter allegedly dies in a plane crash there. What she uncovers is even more terrifying: a government conspiracy to quash a once-dormant, lethal virus from the melting permafrost, by any means necessary.

6.     Honalee Productions, Theory of Evelyn $30,000
Evelyn Arno is a genius… and she’s not afraid to tell you so herself. A doctoral student still living in a trailer park with her mom and little sister, she’s on the cusp of a physics breakthrough that could change our understanding of the universe and put her shoulder-to-shoulder with Einstein and Newton. But in the elitist, backstabbing world of academia, her unrefined, reactive personality – not to mention her appetite for bourbon and toxic relationships – could cost her everything.

7.     Imagine Create Media, Hannah Has It All $30,000
Eight-year-old Hannah has it all — a loving family, a fancy home and all the toys she could ever want — but the only thing that truly makes her happy is to help others. By finding creative ways of helping and bringing joy to her community, that’s when Hannah feels she truly has it all.

9.     Marie Clements Media, Winnetou $30,000
Winnetou is an action adventure inspired by the fictional Indigenous hero in the novels of German author Karl May.  In this modern re-telling of the wild west, Detectives Winnetou and German immigrant Shatterhand come together to fight for justice against greed and corruption in a world facing environmental collapse, racial injustices and social reckoning.

10.  Omni Film Drama Development, The Birth House $30,000
Based on #1 National and International true story Bestseller by Ami McKay, THE BIRTH HOUSE follows the life of midwife Dora Rare in rural Nova Scotia during the tumultuous years of WWI. Under the tutelage of mysterious folk healer Miss Marie Babineau, Dora becomes the person the women of Scots Bay trust most to bring their children into the world.

11.  Resonance Films, Senior High $30,000
Senior High is half hour comedy series about a recently widowed 60-something who decides to go back to highschool.

12.  Screen Siren Pictures, Salomon’s Storage $30,000
A truly unique fish-out-of-water series about nineteen-year-old Ada, her brother Abdual, and her parents Ara and Karim Salomon — refugees who come to Vancouver with only a drive to survive and a determination to forge a new life for themselves. After their cousin (and immigration sponsor) Abir’s untimely death, they are given a choice by their new mob employer — take over managing Abir’s sex club or seriously put at risk their refugee status. With their backs against the wall, they choose to accept the mob’s offer.

13.  Tilt 9 Entertainment, Celebrity Worship $30,000
When a spiritual epiphany inspires a provocative young pop star to embrace Catholicism, she forces two conflicting institutions into bed together. Hardly sexy, salvation threatens to destroy the brand to which she has devoted her life. Immortal soul or immortal celebrity – It’s not an easy choice.

14.  Unity Pictures, Vancouver Gang Series $30,000
Vancouver Gang Series is a one-hour serialized drama that will examine the light and dark sides of society told through the prism of the drug trade in Vancouver. From the local street hustler all the way up to crooked politicians, it is the story of power and greed and the lengths people will go to maintain it. The epicenter of the series is a Shakespearean tale amongst the powerful Sangra crime family at a crossroads in their personal relationships and business enterprises.

“I’m so excited to see these local filmmakers get the support they need to get their projects off the ground. Through Reel Focus BC, Access 2020 helps people do research or develop a script. This is the first time the Canada Media Fund has partnered with a provincial funder, which shows they recognize the strength and talent of our industry here in B.C.”

“We are tremendously proud to announce these recipients of a pilot program with national collaboration to deliver support to B.C. creators in the province’s motion picture industry.  By bridging federal support to local talent, B.C.’s creators are offered opportunities to reach new creative heights and compete in today’s expanding and exciting content marketplace.”

“The Canada Media Fund is committed to supporting the B.C. production community. There is an enormous wealth of talent and know-how in this province. This program will give B.C. creators an extra boost to succeed in the global, borderless marketplace. We’re thrilled to partner with Creative BC and CMPA-BC on this initiative and congratulate the 14 talented creators who will receive funding through our partnership.”

“CMPA-BC congratulates the 14 independent BC-based production companies receiving this crucial development funding through Access 2020. We are thrilled at the range and calibre of the children, youth and drama projects selected, confident that this timely support will translate into more green lights for our talented domestic producers.”

Creative BC is an independent society created and supported by the Province to sustain and help grow British Columbia’s creative industries: motion picture, interactive and digital media, music and sound recording, and magazine and book publishing. The society delivers a wide range of programs and services with a mandate to expand B.C.’s creative economy. These activities include: administration of the provincial government’s motion picture tax credit programs; delivery of program funding and export marketing support for the sector; and provincial film commission services. Combined, these activities serve to attract inward investment and market B.C. as a partner and destination of choice for domestic and international content creation. The society acts as an industry catalyst and ambassador to help B.C.’s creative sector reach its economic and creative potential both at home and globally.

The Canada Media Fund (CMF) fosters, develops, finances and promotes the production of Canadian content and applications for all audiovisual media platforms. The CMF guides Canadian content towards a competitive global environment by fostering industry innovation, rewarding success, enabling a diversity of voice and promoting access to content through public and private sector partnerships. The CMF receives financial contributions from the Government of Canada and Canada’s cable, satellite and IPTV distributors. Please visit cmf-fmc.ca.

The Canadian Media Producers Association is the national advocacy organization for independent producers, representing hundreds of companies engaged in the development, production and distribution of English-language content made for television, cinema and digital media channels. We work to promote the continued success of the Canadian production sector and to ensure a bright future for the diverse content made by our members for both domestic and international audiences. The BC Producers Branch (CMPA-BC) is a provincial chapter of the CMPA, working on behalf of British Columbia production companies.