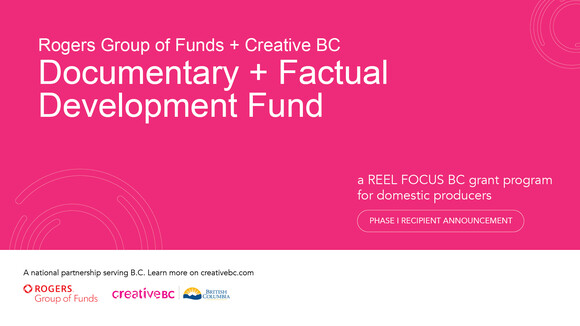 Vancouver, B.C. (August 13, 2020) The Rogers Group of Funds and Creative BC are pleased to announce the first recipients of a new Early Stage Investigation Development Program, part of the Documentary and Factual Development Fund (the Fund) launched this year by the funding partners.

Thirty-three recipients will be granted up to $7,500 each, leveraging these investments to develop motion picture projects in the documentary series and factual series formats, as either one-offs or series. Funds disbursed in this round will total approximately $250,000 of the total $800,000 investment over two years committed by Rogers Group of Funds and Creative BC.

The Fund represents the first partnership in Canada at the provincial level between the Rogers Group of Funds and a provincial partner.

The Fund and partnership are part of the Reel Focus BC suite of programs delivered by Creative BC, designed to drive new project activity in the sector and the creation of B.C.-owned intellectual property for film and TV. The Fund delivers essential support to domestic producers of documentary and factual content so they can succeed in an increasingly competitive and dynamic marketplace.

Significantly, this round of funding’s key feature is support of individual documentary and factual projects prior to being greenlit by a market trigger, such as a broadcaster or streamer, focusing on needed supports during early stage development with a focus on investment into the creation of high-quality bids.

The Rogers Group of Funds and Creative BC are pleased to announce the recipients of the first intake for the Early Stage Investigation Development Program:

International Indigenous artists, storytellers and scientists unite in Haida Gwaii to celebrate the night sky as 12,000 satellites are launched, destroying the darkness as we know it, forever.

A wild ride that begins with a young US Army Ranger in a small British Columbia town, leads to a Tacoma bank robbery, and splinters off into a web of organized crime, attempted murder and exposed U.S. military secrets.

Magician Shawn Farquhar leads an exploration of the relationship between illusionists and playing cards and reveals how he found the clues to solving what might be one of the world’s oldest cold case murders, hidden in among the Jacks, Queens, and Kings.

Identical twin sisters Taiwo Lijadu and Kehinde Lijadu stormed the 1970s Nigerian pop music scene. The twins sang from the heart about equality for women, love, dance, corruption, and trouble in the streets. Fans adored them, but their rebellious lyrics also gained them enemies in Nigeria’s male-dominated music industry and from the country’s political elite – and then, the twins disappeared.

The trouble with trophy hunting. An activist wildlife filmmaker investigates the ethics and consequences of trophy hunting and questions humanity’s role in nature.

47 is a short documentary that explores the complicated relationship between grandfather and grandson as Damien Eagle Bear seeks to better understand his grandfather, Jim Wells an accomplished educator, through the writings he left behind.

Cowichan Archeological Consultant Harold Joe explores how one critical species, the cedar tree, has been and continues to be central to the cultural life of West Coast First Nations.

A journey into the people, culture, and history of Vancouver told through the iconic dishes that define its mosaic of immigrant communities

Tyler Pelke survived being sexually assaulted, having his throat slit, and being set on fire. The hard part was finding forgiveness.

Through celebratory dance, cultural knowledge and science, this documentary will consider the current state of our winged relatives, aagaskoons, or the prairie chicken.

More than two thirds of the world’s population will live in cities by 2050. Future Makers is a series about front-line innovators leading change in our cities, driving positive climate action and addressing the next-normal in a post COVID-19 world.

In this coming-of-age documentary, five girls on a curling team pursue their dream of becoming champions, while navigating teenagehood.

This documentary will investigate how a new generation of Artificially Intelligent, ‘fool-proof’ lie detectors could radically refine our relationship with the truth.

Exploring the diverse cultures of Vancouver through the humble bakery, filmmaker Derek Kwan visits with various bakers who share their stories.

In the wake of the damming of the Nechako River and a looming court decision, two Chiefs form an unlikely alliance to rebuild their communities.

The untold story of how an animation outlaw and his renegade band of ragtag animators helped build Vancouver into one of the greatest animation cities in the world.

Two vintage lesbians ride the rails, coast to coast, looking for evidence of a once thriving culture. Is the lesbian nation really dying? Hop on the train and find out!

A remarkable team of Manitoba Chiefs and Mayors team up to reconcile their past and save the one lake they all rely on, “Muddy Waters”.

Artifact Mysteries uncovers the hidden stories behind some of the worlds most revered Indigenous artifacts.

How to Solve Your Own Problems is a feature documentary odyssey about plastic and how we can address the problem of plastic pollution in our own back yard.

Indigenous communities and cultural ambassadors restore and revitalize their ancestral knowledge and culture by sharing stories and oral histories that connect them to the land, waters, and sea.

Explore the taboo topic of being gay and lesbian in the South Asian community of Metro Vancouver. Kayden tells a poignant story of family rejection and self-discovery while embracing his newfound family and life.

The story of four men who fled tyrannical lands, they were captured, imprisoned and tortured by an immoral authority, now liberated they are in pursuit of justice and freedom.

The Last Totem follows master carver Carey Newman as he pioneers new tech to continue his craft in the face of dire environmental impacts and criticism.

A POV documentary that explores how several Indigenous male artists, (a musician, a painter and a filmmaker) are using creativity in their medium to help heal the wounds and scars of colonization.

A 6 x 60-minute documentary series exploring the alarming home-grown sex trafficking crisis in Canada, told from the perspective of the victims themselves and a small group of civilian warriors who are determined to stamp it out.

As an imminent threat to bat survival approaches British Columbia, bat supporters and scientists in the province search for solutions they hope will save them.

Honourable Lisa Beare, Minister of Tourism, Arts & Culture and Responsible for Sport and Multiculturalism
“By supporting projects right at the start, we’re telling B.C. filmmakers we believe in you, we believe in your story. As part of Reel Focus BC, this funding is key to helping local creators get their project off the ground. This innovative partnership highlights the strength of documentary filmmaking here in B.C.”

Prem Gill, CEO, Creative BC
“Creative BC and Rogers have strategically invested into thirty-three domestic creators of documentary and factual content.  This increases their competitiveness at a time of strong opportunity for these genres—it supports the creation of high quality pitches to broadcasters and streamers, all of which are seeking content for increasingly demanding consumers.”

Robin Mirsky, Executive Director, Rogers Group of Funds
“We are incredibly excited to partner with Creative BC as our first provincial partnership to create more opportunities for filmmakers in British Columbia. Creative BC is known for empowering content creators across the province, and this fund will support directors and producers at such an incredibly important stage of development. British Columbia has a wealth of creativity and passion for film, and we are honoured to support these committed filmmakers as they launch their projects.”

Creative BC is an independent society created and supported by the Province to sustain and help grow British Columbia’s creative industries:  motion picture, interactive and digital media, music and sound recording, and magazine and book publishing. The society delivers a wide range of programs and services with a mandate to expand B.C.’s creative economy. These activities include: administration of the provincial government’s motion picture tax credit programs; delivery of program funding and export marketing support for the sector; and provincial film commission services. Combined, these activities serve to attract inward investment and market B.C. as a partner and destination of choice for domestic and international content creation. The society acts as an industry catalyst and ambassador to help B.C.’s creative sector reach its economic and creative potential both at home and globally.

ABOUT ROGERS GROUP OF FUNDS

Since 1980, the Rogers Group of Funds has supported Canada’s independent film and television producers with more than $600 million through three different types of funding. Rogers Telefund offers loans to Canadian independent producers; Rogers Documentary Fund, Canada’s premier source of funding for documentary films; and Rogers Cable Network Fund, an equity investor in Canadian programs with a first play on a Canadian cable channel. Three different types of financing. Three different funds.  All from one source – Rogers.