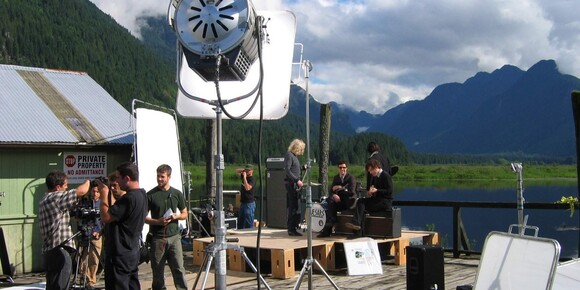 During ten business days leading up to Earth Day 2021, the inaugural REEL Earth Day Challenge encouraged collaboration and competition across the entire industry by bringing crews, productions, suppliers, vendors and other industry stakeholders together in the spirit of giving and environmental sustainability.

"The motion picture industry works, lives and depends on regional parks across B.C. and acknowledges their location on the unceded ancestral lands and waters of many Indigenous nations,” said Prem Gill, CEO of Creative BC. “REEL Earth Day Challenge fundraises to give back to many of these green spaces in Metro Vancouver that sustain us all. It’s one important part of Reel GreenTM’s overall activities, which unite industry in concrete actions that reduce its carbon footprint.”

Metro Vancouver’s regional parks have hosted many film productions over the years. As filming locations, they continue to play a key role in the industry’s success, having hosted 49 productions and the equivalent of 360 film activity days in 2019 alone.

“As majestic backdrops for countless film and television productions, Metro Vancouver’s regional parks have earned a spot on centre stage both for their scenery and their incredible contributions to the environmental health and livability of our region,” said John McEwen, Chair of Metro Vancouver’s Regional Parks Committee. “That is why we are delighted that B.C.’s vibrant film industry shares in our vision to protect and enhance our regional parks.”

·       restoring forested habitats at Kanaka Creek and Tynehead regional parks by returning previously disturbed sites back to their natural environment.

“For more than 20 years, the Pacific Parklands Foundation has dedicated its time and resources to supporting Metro Vancouver in ensuring regional parks are well protected and preserved,” said Kevin O’Callaghan, President of the Pacific Parklands Foundation. “This significant contribution will benefit the ecological health of regional parks, and we gratefully applaud the impressive fundraising efforts of Creative BC and the B.C. film industry.”

Fifteen teams participated in the challenge, with The Scriptures (Warner Brothers) coming out on top by raising $51,676. They were followed by Big Sky (20th Television) at $22,518, and The Imperfects (Nomadic) at $21,840. More than 400 donors contributed to the challenge.

Creative BC is an independent society created and supported by the Province to sustain and help grow British Columbia’s creative industries: motion picture, interactive and digital media, music and sound recording, and magazine and book publishing. The society delivers a wide range of programs and services with a mandate to expand B.C.’s creative economy. These activities include: administration of the provincial government’s motion picture tax credit programs; delivery of program funding and export marketing support for the sector; and provincial film commission services. Combined, these activities serve to attract inward investment and market B.C. as a partner and destination of choice for domestic and international content creation. The society acts as an industry catalyst and ambassador to help B.C.’s creative sector reach its economic, social, environmental and creative potential both at home and globally. Website: creativebc.com | reelgreen.ca

Pacific Parklands Foundation is a registered charity dedicated to the conservation and enhancement of Metro Vancouver’s regional parks. As the fundraising arm of Metro Vancouver Regional Parks, Pacific Parklands Foundation (PPF) provides the additional financial support needed to realize special projects and initiatives that fall outside of what government funding is able to provide. The PPF depends on people who love our parks and who care about stewarding these precious ecological treasures for future generations. Website: pacificparklands.com

Metro Vancouver is a federation of 21 municipalities, one electoral area and one treaty First Nation that collaboratively plans for and delivers regional-scale services. Its core services are drinking water, wastewater treatment and solid waste management. Metro Vancouver also regulates air quality, plans for urban growth, manages a regional parks system and provides affordable housing. The regional district is governed by a Board of Directors of elected officials from each local authority. Website: metrovancouver.org.