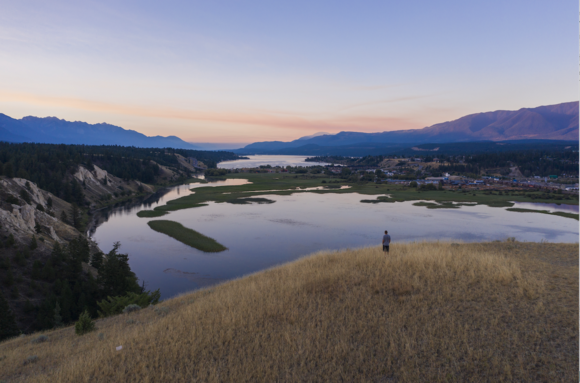 John is a senior member of the Directors Guild of Canada – British Columbia District and began working in the BC film industry in 1985. He has since worked on over 60 TV movies, feature films, TV Series, Documentary Films, and TV Commercials as a Location Manager, Production Manager, Unit Manager and Producer. He remains very active in the film industry today.

John has lived in the Kootenay region since 2005 and currently resides in the Slocan Valley. Today, he maintains close ties with the local community as a Board Member of Kootenay Land Trust and Winlaw Watershed Committee, as well as a member of the West Kootenay Conservation Program, West Kootenay EcoSociety and Valhalla Wilderness Society. With his long standing residency and ties to the region, he brings a deep understanding of the local industry and aligned values to the role.

In his career, he has scouted film locations throughout the Kootenays. In 1995, John was part of the film crew for the feature film Magic in the Water, which was shot in the Kaslo area and starred Mark Harmon, Harley Jane Kozak and Joshua Jackson. He also helped land the TV movie Christmas Miracle in 2005, which used locations in Queens Bay and Nelson. In 2010, he helped land the feature thriller The Tall Man, which filmed in Salmo, Ymir, and Nelson and starred Jessica Biel.

In addition to his passion for film, John is dedicated to sustainable film production efforts and is thrilled to take the Reel Green Climate and Sustainable Production Training with Creative BC. John has been an environmentalist since discovering the Sierra Nevada, Cascades, and the Coast Mountains of British Columbia at a young age. He has climbed on the Squamish Chief, made multiple expeditions to the Waddington Range, Mt Logan in the Yukon, and expeditions to the Chugach Range and on Mt Denali in Alaska. His travels have led him to an attempt on the 7,000m peak, Mt Chogolisa in the Karakoram Range adjacent to K2. He believes in wilderness conservation, protections of our oceans, coastal areas, watersheds, lakes and rivers. He supports the preservation of old growth and boreal forests, and promotes responsible and careful stewardship of British Columbia's natural resources. He is concerned about climate change and is committed to reversing and mitigating its causes. He looks forward to helping turn the British Columbia film industry into a green industry with a reduced footprint, that we can all be proud to be a part of.
John believes that the Kootenay region is full of absolutely remarkable, stunning, and cinematic locations that are ready and primed to be discovered by the film industry on a much larger scale.  “Known for its unique artistry and talent, its stunning beauty and heritage roots,” remarks John, “the Kootenays are ready to debut as a premier film destination to the world. The Kootenay region is ready for its 'close up'!"
“The motion picture industry is a strong economic engine in B.C.,” said Melanie Mark, Minister of Tourism, Arts, Culture and Sport.  “I can’t wait to see all the productions the new commissioner will bring to the Kootenays that will showcase this amazing part of B.C. to screens around the globe.”
The History and Future of the Kootenay Film Commission
Previously, Joanna Maratta was the liaison for the Kootenay Columbia Film Region from 1998 to 2019.  She took on the film liaison portfolio when she was the Economic Development Officer with the City of Nelson.  When the office closed, she continued on as an independent contractor with the BC Film Commission, later called Creative BC. She ends her role with encouragement for the new film commission: “It was my great pleasure to act as liaison for the Kootenay Columbia Film region for over 20 years. I want to thank all the communities in the region for their support over the years to attract projects to their communities as well as the productions companies, crew and especially the staff at Creative BC and the Province of BC for their funding support and guidance for the sector.  Congratulations to John Wittmayer as the new liaison and to The Civic Theatre and Kootenay Rockies Tourism as collaborative partners on the project.”
Kathy Cooper, CEO of Kootenay Rockies Tourism Association, expresses KRT’s excitement for the next stage in the partnership: “Kootenay Rockies Tourism is looking forward to working with John Wittmayer as the new Film Commissioner.  The Kootenay Regional Film Commission represents a significant step forward in our ability to expand and grow the film sector in a way that we have not seen to this point. We believe the growth of the film industry in our region will strongly contribute to raising the profile of the Kootenay Rockies as a prime tourism destination on the world stage.”
In his new role as the Film Commissioner for this region and through his many years of experience, John will market the Kootenays as an attractive film destination and offer his assistance to help pave the way for filmmakers to bring their projects here. In the upcoming months, John will be working closely with Lynn Trinh, the Kootenay Screen-Based Industry Regional Program Manager, to build out and upgrade the film locations library which will be housed on KootenayFilm.com. Lynn is ecstatic about John’s experience and the future of the commission: “I feel incredibly fortunate to work with someone with such a deep understanding of our region and a longstanding experience in the film production industry as our new film commissioner. We are grateful to Joanna Maratta for her service over the last two decades and we look forward to building upon her efforts.”