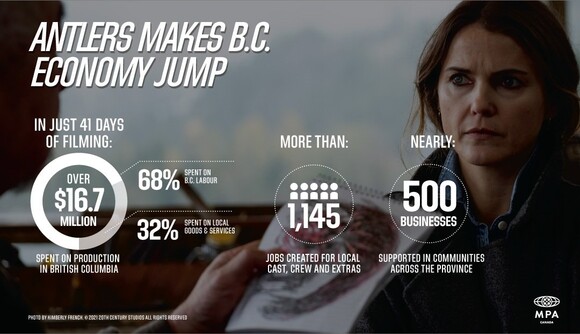 In just 41 days of filming, ANTLERS created jobs for over 1,145 local cast, crew and extras, and spent more than $11.4 million on B.C. labour. Nearly 500 community businesses across the province benefited from production-related purchases, with over $5.3 million spent on a wide range of goods and services, including:

“From talented local crews to a vibrant business community, there are many reasons why we love working in this province,” said Fox Searchlight Executive. “For ANTLERS, it was B.C.’s unique locations that really set this production apart. Shooting through the fall season – against a backdrop of mountains, water and forest – the natural environment almost took on a role of its own.”

“Film, television and streaming production is a significant job creator in the province, providing opportunities for talented B.C. creatives and support for hundreds of local businesses,” said Wendy Noss, President, Motion Picture Association – Canada. “From Minaty Bay to Golden Ears Park, when a production like ANTLERS shoot on location, it brings with it an immediate boost to the communities where filming takes place.”

“B.C.’s production expertise and capacity is increasing across the entire province,” said Prem Gill, CEO of Creative BC. “Many cities and towns like Hope are welcoming the industry, and we’re seeing a real trend that extends the positive economic impacts of filming far beyond Greater Vancouver.”

Follow us on Twitter and check out The Credits for behind the scenes interviews with Canadian creatives.