The Fabienne Colas Foundation’s Being Black in Canada Program, presented by Netflix unveils its 2021 Participants 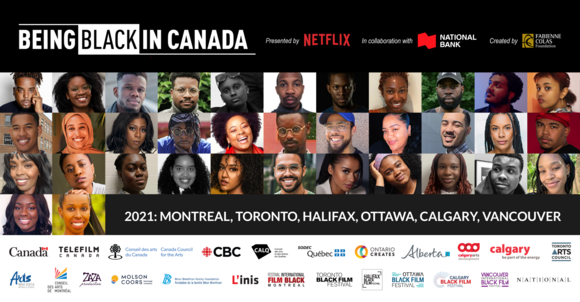 The Fabienne Colas Foundation’s Being Black in Canada Program – presented by NETFLIX, in collaboration with the National Bank, and supported by Telefilm Canada and the Canada Council for the Arts – is proud to announce its 35 new participants. In 2021, the program expanded to Ottawa, Calgary, and Vancouver, joining the 3 immensely successful cities, Montreal, Toronto and Halifax.
The Fabienne Colas Foundation’s Being Black in Canada represents Canada’s largest mentorship, training, and creation program to be entirely dedicated to Black filmmakers. As part of the Fabienne Colas Foundation’s Youth and Diversity Initiative, the FCF’s Being Black in Canada program was created to make up for the blatant lack of diversity and the lack of Black People in front and behind the camera in Canada. Founded in 2012, with the first cohort launched in 2014, the Program gives a voice and a platform to creators who would not otherwise be seen or heard. The Foundation actively promotes equal opportunities for Black Film professionals while fostering Diversity on screens.
In 2021, the FCF’s Being Black in Canada program enabled 35 emerging filmmakers, aged 18 to 30, from the Black communities of Montreal, Toronto, Halifax, Ottawa, Calgary, and Vancouver to create 35 documentary shorts of approximately 10 minutes each. The 35 young filmmakers were guided through the many steps in audiovisual production (screenwriting, directing, editing, post-production, etc.) and creation of a documentary short. This process was carried out under the tutelage of industry experts with professional equipment and dedicated mentorship.
Congratulations to Vancouver based filmmakers, Ilhan Abdullahi, Manny Obiajunwa, Omorose Osagie and Zavia Forrest, who have been selected for this program.
The Being Black in Canada 2021 cohort will have the opportunity to present their films as a World Premiere at the Toronto Black Film Festival (Feb. 2022), followed by the Halifax Black Film Festival (Feb. 2022), the Montreal International Black Film Festival (Sept. 2022), the Ottawa Black Film Festival (March 2022), the Calgary Black Film Festival (May 2022) and the Vancouver International Black Film Festival (December 2022).
DISCOVER THE FULL LIST OF SELECTED FILMMAKERS