Creative BC’s Career Development: Record in BC program enables connection and creativity to flourish on Gabriola Island and in Langford during the pandemic. 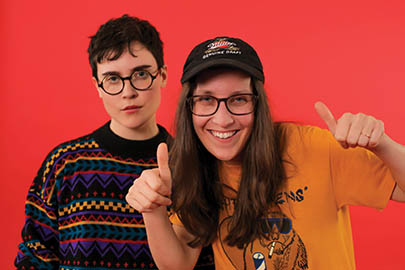 Since 2014, Partner – the guitar-driven indie rock, power pop, and “queercore” effort of vocalist and lead guitarist Josée Caron, and vocalist and rhythm guitarist Lucy Niles – has compelled listeners with structurally-adventurous and triumphantly-abstract music that interrogates life’s big themes. Making use of rock as their underpinning musical lexicon, Partner draws inspiration from iconic ’90s artists such as Weezer, Nirvana, Smashing Pumpkins, and Veruca Salt, alongside stylistic influences akin to Melissa Etheridge, k.d. lang, and Tegan and Sara. Through their music, the group explores concepts like joy, memory, loneliness, and regret with incisive humour, keen insight, and – always – contagious enthusiasm.

Partner’s career to date has been relatively brief, but their trajectory and accolades have been substantial. Since taking flight in Sackville, NB, the group has been noted for winning the SOCAN Songwriting Prize in 2018 for their infectious “Play the Field”. Also in 2018, the group earned a profile on NPR’s popular Tiny Desk Concerts series. Their other albums have also received critical and popular acclaim: their 2017 debut album, “In Search of Lost Time”, was shortlisted for a coveted Polaris Music Prize. In the period since these initial releases, the band has further developed and refined their now-distinctive “post-classic rock” sound, moving past the 90s-era indie rock aesthetic typical of their earlier years. Despite this conscious evolution, they continually uphold a sense of invention, energy, and vitality at the core of their music-making.

In 2020, Creative BC’s Record in BC program directly supported costs associated with recording, mastering, and album artwork for new songs that appear on the group’s forthcoming EP. The EP is slated for commercial release in late April 2022.  The group spent two collaborative weeks quarantining and writing on remote Gabriola Island before spending seven studio days laying down tracks with Jordan Koop at The Noise Floor. The project has afforded Partner heightened access and connection to existing and new audiences coast to coast to coast, and kept the group meaningfully engaged in their unique style of music-making and storytelling during the COVID-19 pandemic. The final EP’s commercial and critical reception will also help to inform and sustain Partner’s longer-term plans to return to touring and live performances in the future.