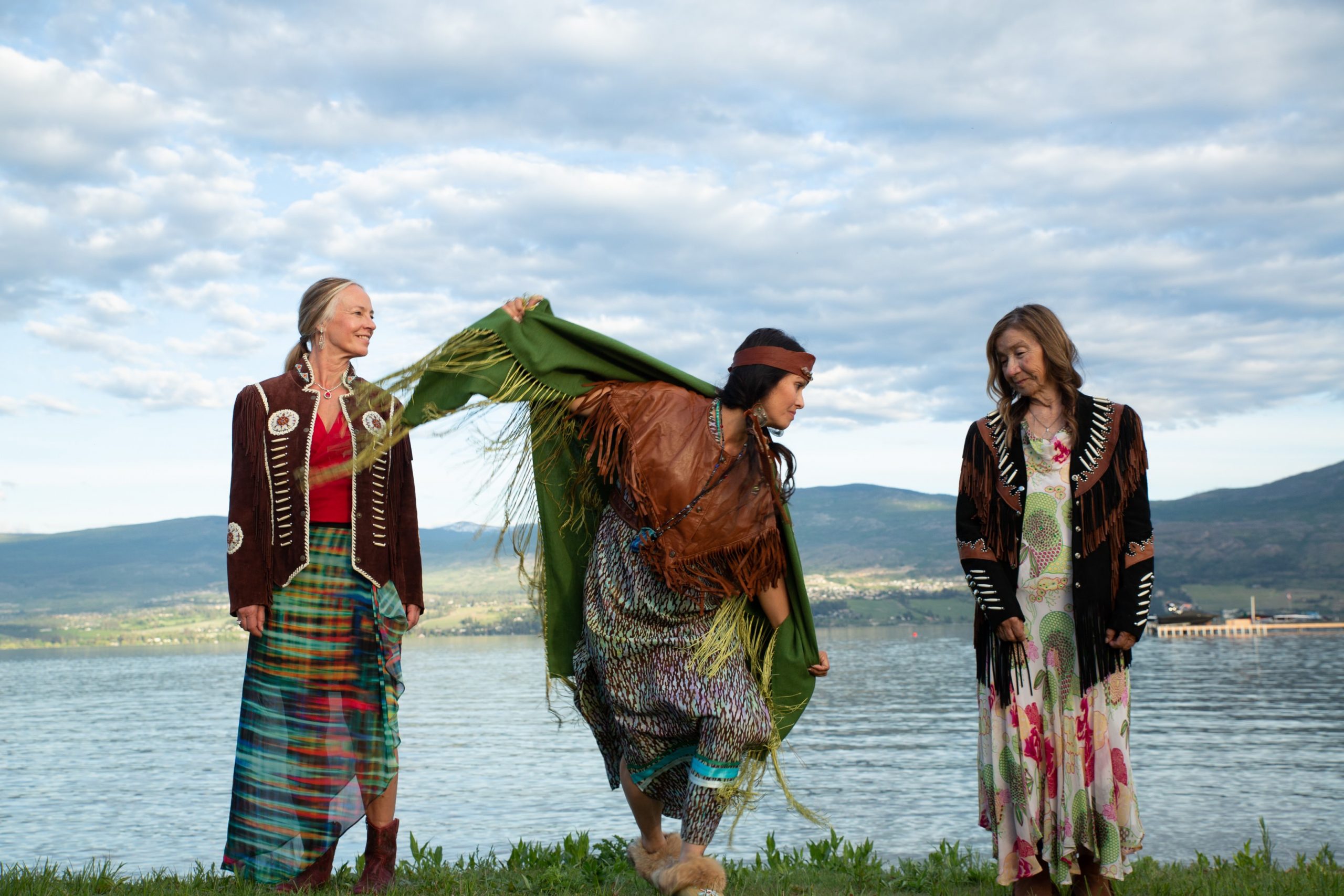 When Heather Pawsey pulled an unpublished and forgotten opera score off of a dusty shelf at the Vancouver branch of the Canadian Music Centre back in 1995, she had no idea that she was setting in motion a chain of events that would ultimately change her life. Nearly three decades after the fact, support from Amplify BC’s Career Development program has brought these events full-circle. 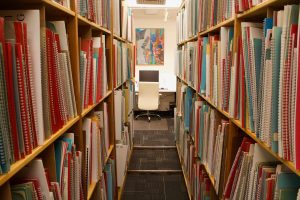 Scores at the Canadian Music Centre’s public library and archives.

That year, Heather was quickly building her professional musical career as a B.C.-based soprano, with engagements in concert and recital halls, and on local opera mainstages. Balancing a robust performance and teaching schedule, Heather was also pursuing a concurrent passion for contemporary Canadian music, discovering intriguing, lesser-known repertoire that brought both universal and arcane stories into sharp relief for audiences from all walks of life.

What Heather found that day in 1995 qualified powerfully. The Lake – a one-act chamber opera from 1952, by noted Canadian composer Barbara Pentland (O.C.; OBC; 1912 – 2000), with a libretto by acclaimed Canadian poet Dorothy Livesay (O.C.; 1909 – 1996) – is based on the life of Susan Allison, the first White female settler who lived in what is now known as West Kelowna. Through story, archetype, and myth, the work recaptures Susan’s lived experiences with the syilx / Okanagan people, the land, the lake, and an elusive creature known as the ‘na-ha-a-itk’ (popularly known as the Ogopogo) who resides within it. Since its commissioning, the opera had never received a professional live performance, and had only been broadcast once on CBC Radio in 1954. Heather was immediately taken by the musicality and complex depth of the work, and its deeply-evident connection to the lands of British Columbia. Embracing a newfound challenge with customary vigor, Heather won the Eckhardt–Gramatté National Music Competition in 1996 with a program that included an aria from the opera. The coup cemented Heather’s role as a leading Canadian interpreter of 20th century music. 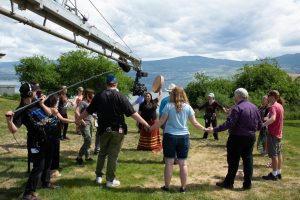 The company in a contemplative moment, pre-shooting.

Fast-forward to 2014: Heather had since founded Astrolabe Musik Theatre to serve B.C.’s thriving new music ecology as both a producer and a presenter. Among the company’s priority projects was a partnership with Vancouver’s instrumental Turning Point Ensemble to present the first live concert performance of The Lake at UBC’s Chan Centre in November 2012. As the contemporary, Western-composed opera upheld Indigenous culture and spirituality at its core, while also portraying real people and events, Heather and Turning Point knew they needed to reach out to the syilx / Okanagan people at the earliest-possible opportunity to better understand the unique properties and energies at the work’s core. The group invited Jordan Coble, of Westbank First Nation, to travel to Vancouver to educate the project’s creative team and their subsequent audiences.

Shortly thereafter, a serendipitous moment occurred for Heather: a chance meeting with Westbank First Nation elder, artist, knowledge-keeper, language authority, and teacher Delphine Derickson backstage after one of the work’s concert performances. Heather and Delphine’s immediate and deeply-personal connection sparked a two-year cross-cultural collaboration between Astrolabe, Turning Point, and members of Westbank First Nation. This confluence of events ultimately resulted in the co-created, fully-staged, world-premiere performances of The Lake / n’-ha-a-itk in August 2014 at Quails’ Gate Estate Winery in West Kelowna: the actual site of Susan and her husband John Allison’s original 1873 ‘Sunnyside Ranch’, and the traditional, ancestral lands of the syilx / Okanagan people. 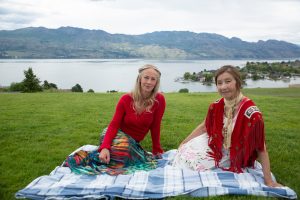 Heather Pawsey and Delphine Derickson in a moment of repose.

In 2019, a Career Development grant from Amplify BC bolstered Heather’s career by enabling her to locate new audiences and forge the creative and production skills necessary for success as an independent artist in an increasingly multidisciplinary world. The grant supported the filming of The Lake / n’-ha-a-itk, a unique music video and documentary crafted in support of the opera itself. Heather was joined on film by several of the B.C.-based principals from The Lake / n’-ha-a-itk’s world-premiere performance, including Angus Bell (bass-baritone), Kwangmin Brian Lee (tenor), and Barbara Towell (mezzo-soprano).

The film brings to life all of the Indigenous and non-Indigenous storytelling, music-making and movement from the original production, alongside a bracingly-honest oral recounting of the successes, learnings, and failures of the project. Director John Bolton, of Opus 59 Films, collaborated with Heather and the creative team to ensure a seamless transition between mediums. As a documentary, it explores Heather and Delphine’s extraordinary friendship, and the ground-breaking cultural collaboration in which they decolonized The Lake by incorporating syilx / Okanagan perspectives. As a music video, it brings the opera to life, alive with the rhythms of water, sea, and wind: notably, the only Canadian opera ever to be shot specifically for film. Career Development funding directly assisted with video production and editing costs, and provided the project’s creative team with a springboard from which to pursue further planning and innovation with confidence. 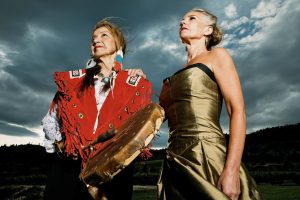 The Lake / n’-ha-a-itk saw its world premiere in Montreal on March 24, 2022, at Le FiFa International Festival of Films on Art, and will have its B.C. premiere on May 6, 2022, at 7:45 pm at the DOXA Documentary Film Festival (at the VIFF Centre VanCity Theatre). A second screening will be offered on May 12, 2022, at 7:45 pm at SFU’s Djavad Mowafaghian Cinema. Online viewing concurrent to these in-person showings will be offered here. Astrolabe is also currently submitting the film to other documentary and music film festivals throughout North America. As well, later this year, The Lake / n’-ha-a-itk will be available to view at no cost on Telus Optik in both British Columbia and Alberta.

When Heather was asked to reflect on the specific impact of Amplify BC’s support on this project, in the wake of its achievements and outcomes, she offered:

“Amplify BC’s Career Development was a huge boost for me as an artist, and for Astrolabe, as a company. As a singer, my performance life had been live music and recording; as a company, Astrolabe produced and presented live performance. Making a music video of what had been a live opera was a big step out (and forward!), with a steep but exciting learning curve. It was also a phenomenal opportunity to share the Canadian music I love – and, this very specific, fascinating, and relevant B.C. story – with audiences far greater, and in many more places, than our live performances ever could. I grew as a singer by performing in the film: navigating the very different skill set required when dealing with cameras, crew, singing to play-back, and no live audience in attendance.”

Beyond these personal opportunities for growth, Heather is also candid about this project’s institutional impact on Astrolabe as an organization.

“As a project, [the film] established Astrolabe as a company that could successfully produce a film with a sizeable budget, and significantly raised our profile in the opera and new music communities. It’s attracted greater interest in the work Astrolabe does, which directly influences the quantity and quality of work we can do moving forward. Astrolabe has a number of new projects in the works: all of which we’re very excited about, and which build on the success of our film.” 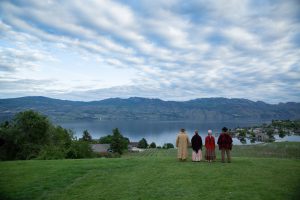 The Lake’s principals in a quiet moment on-site.

Heather is deeply grateful for the successes that support from Amplify BC have enabled to take flight. However, she also wants other artists and companies – particularly, those rooted in the classical, new music, and operatic idioms where other channels of public funding are more commonly known and accessed – to realize that Creative BC also represents a worthwhile potential opportunity for exploration and research.

“As a ‘classical’ / 20th and 21st-century new music singer and producer, I hadn’t really been aware of the funding opportunities offered by Creative BC until I was fortunate enough to have someone whose advice I value and trust bring them to my attention, and encourage me to apply. The process and forms are different from what you may be used to from other funders, but don’t let that discourage you! Do your best to answer the questions, and recognize that not all of them are necessarily immediately applicable to classical music.”

Heather effusively concludes, “And, if in doubt, reach out to the incredibly helpful people at Creative BC! They were always available to answer any questions I had, and were helpful and encouraging. They also gave excellent feedback on applications, and were easy to talk to. Amplify BC’s support played a truly valuable role in the creation of The Lake / n’-ha-a-itk.“