With support from Amplify BC’s Career Development program, OurGlassZoo invites audiences to listen to their way into a more connected world. 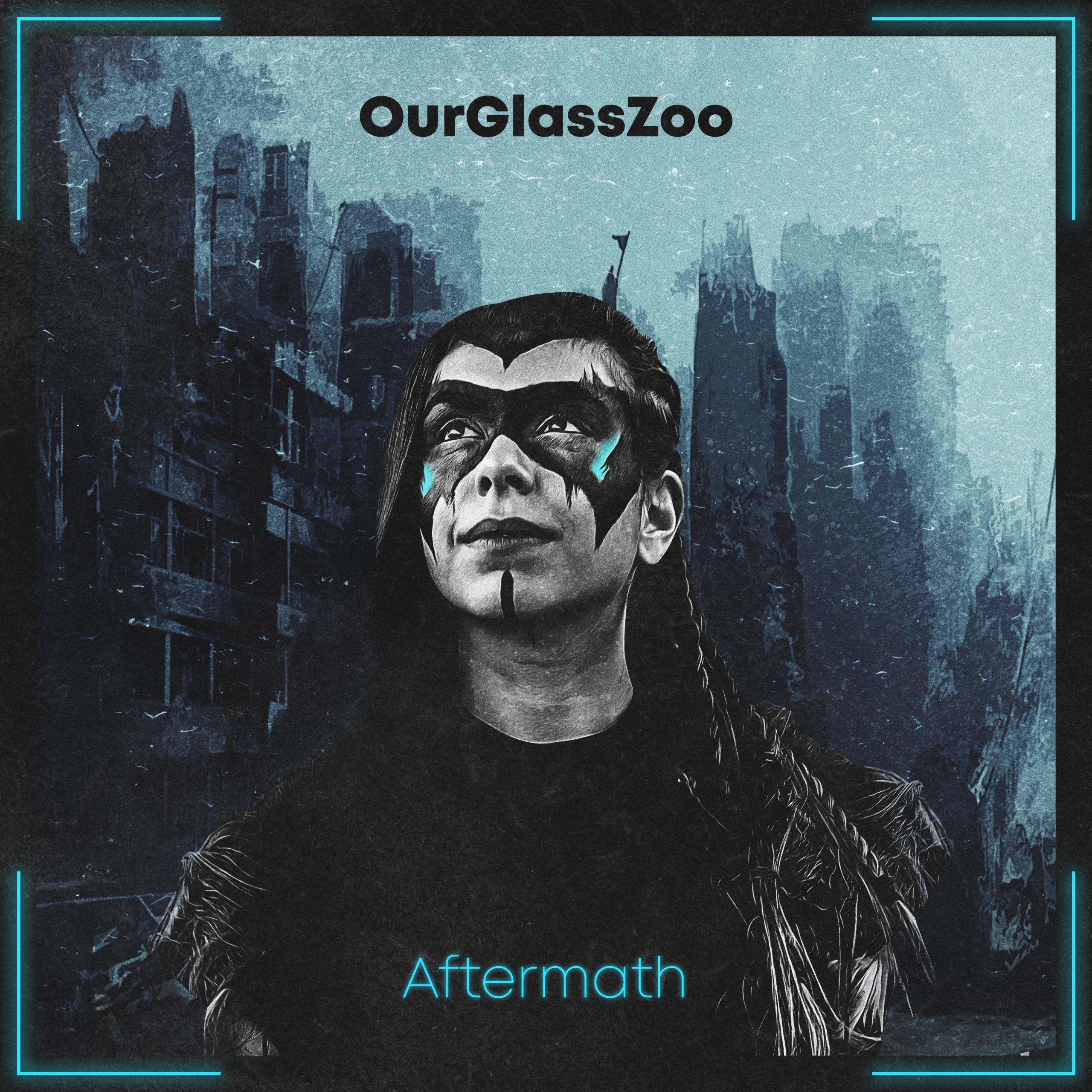 When Josias Tschanz and Garrett Woon first crossed paths in Vancouver nearly a decade ago, they were each reeling from some of life’s worst hurdles. Thanks to funding through Amplify BC’s Career Development program, they’ve been able to continually process and navigate them as OurGlassZoo, one of BC’s most innovative and promising emerging bands. OurGlassZoo’s upcoming album, Aftermath, represents a testament to and accounting of this resilience.

OurGlassZoo’s Aftermath album pre-release event is slated for The Fox Cabaret on Friday, May 27, with special guests Prevail (of The Swollen Members), and fellow local bands 29 East and Lunchtime. Tickets can be purchased here. The album itself will see a June 24 release on the SONY Orchard label. 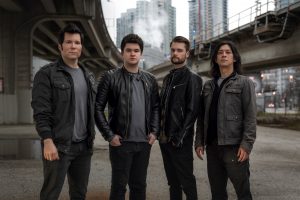 Back in 2015, Josias and Garrett – both newcomers to Canada – had each navigated difficult breakups, and unexpectedly lost respective friends to suicide. Mental health and emotional wellness were constant areas of focus. Their shared decision to form OurGlassZoo – a local, electronic pop-rock band, now on a fast rise – enabled them to begin to look beyond these challenges. From its very early days, everything about the band, including its distinctive name, has reflected a shared commitment to honesty and transparency around life’s systemic challenges. By creating accessible and deeply thematic music that reflects the myriad realities of the human condition to audiences, Garrett and Josias intentionally foster intensely ephemeral spaces where these same audiences can listen their way into a greater sense of authentic connection.

“OurGlassZoo, [as a name], represents a world in which everyone is always trying to look perfect, even though they feel empty on the inside”, explains Josias. “The citizens of OurGlassZoo are manipulated into being superficial. In the process, they forget to connect with one another on a more human level. We, the band, are inviting the citizens of OGZ to reconnect with who they truly are through our music – and, in doing so, finding their own lights within the darkness.” 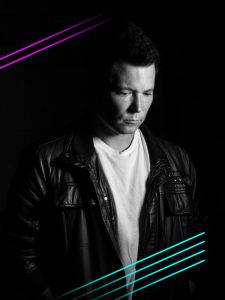 As both a lyricist and an established filmmaker, Josias has worked to infuse OurGlassZoo’s music with a cinematic sensibility and broad social impact. No topic is beyond the scope of careful exploration: the band’s candid performance style and warm, open-hearted presence in both live and studio settings enables individual listeners to connect personally to OurGlassZoo’s music in ways that meet individuals in their respective moments, regardless of context.

Garrett offers that, “In a way, we’re taking our listeners on a journey. While Josias documents a story at each port, Garrett and the other band members are the ship’s hull, mast, and rudder. Two teams sailing together, experiencing, breathing, and taking it all in. Damage onboard occurs, but we try to stay on track, work on the problem, and press on.”

OurGlassZoo’s inaugural live performance was a sold-out concert at the Studio Nightclub on Granville Street in the fall of 2017, with musician and arts advocate Kristina Lao, joined by Trevor Mills, a local mental health advocate. The band worked in partnership with the Canadian Mental Health Association to promote the concert. They successfully raised $3,000 during the event for the CMHA’s suicide prevention program. Their music in that period was largely classic pop-rock: highly melodic, charged with warm synth and driving guitar motifs, and replete with hooks for listeners.

Support from Amplify BC has proven integral to OurGlassZoo’s growth and development. In early 2021, the band secured its first-ever grant from the Career Development program, and spent the next few months recording the album Aftermath, in tandem with Monarch/Vertical Studios. The ten-track album convenes different genres (including, in a first for the band, hip-hop), and features core OurGlassZoo members drummer Ramon Crespo and bass player Scott Rogers, alongside a woodwind and brass section (comprised of saxophone, trombone, and trumpet), cellist Jonah Ocean, pianist Sandra Stadler, Tom Dobrzanski on keyboards, Erin Puckey on backup vocals, and JUNO Award-winning hip hop artist Prevail (of The Swollen Members fame). Material from the album saw a successful initial test for audiences during a sold-out live concert in late 2021, at Vancouver’s historic Railway Club. 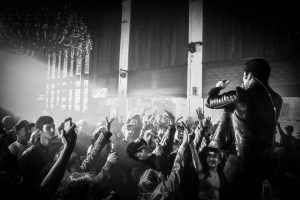 OurGlassZoo in a recent live performance.

In the winter of 2022, a subsequent investment from Amplify BC’s Career Development program enabled this new album to convey its timely messages of hope and resilience to an even wider audience. This additional funding enabled OurGlassZoo to invest in print and digital marketing and promotion for Aftermath, both in Metro Vancouver, and further afield. The traction gained from this marketing thrust also enabled the group to re-sign with WCMA-nominated Canadian record label Volunteer Media, alongside SONY Orchard, for future releases.

Recent world events have only underscored the timely relevance of OurGlassZoo’s Aftermath as both an artifact of a specific time and place, and a piece of art with universal relevance. “Ironically, the first single, ‘Free’, featuring Prevail, was released in a time where there have been crises occurring throughout the world,” says Garrett. “Its main themes are about freedom and equality. The song originated from a conversation between Josias and Prevail about these concepts as subject matter, which eventually led to this unique collaboration.”

In early 2020, the band released its first official music video and single, ‘Astronaut’, from its then-new EP, Hindsight. As Josias explains, “The music video was based around a cinematic concept of entrapment, in which everyone had to wear a mask. The timing of the video felt very odd, as the [COVID-19] pandemic was declared a few days after its release.”  The music video also stars Georgie Daburas, who plays Sabrina’s father in the acclaimed Netflix series The Chilling Adventures of Sabrina.  Notably, the release also secured nominations for Best Rock Music Video at the London Music Video Festival later that year, before winning the same accolades outright at the LA Music Video Awards shortly thereafter.

The follow-up music video for the OurGlassZoo single, ‘Sins’, is similarly enjoying success on the film festival circuit. The story follows an ancient and mysterious figure that emerges into an isolated and dystopian world, using the kinetic power of dance to awaken an archetypal inner child. To date, the video has won awards at the International Music Video Awards, the Munich and Rome Music Video Awards, and the Vancouver Independent Film Festival. OurGlassZoo has also since released its new single, ‘Here’, on March 25, and will release the third single from Aftermath, ‘Reminisce’ (featuring O.K.A), on April 29, 2022. 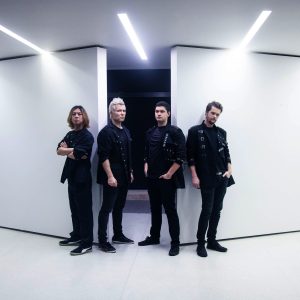 OurGlassZoo, in a more urban setting.

When asked to comment on the impact that Amplify BC’s support has had on Aftermath, Josias says, “Thanks to this grant, we were able to work with collaborators and artists that enriched our musical journey, and brought the project itself to another level. Without it, the outcomes would have been very different.”

Josias also notes that this recent funding from Amplify BC has enabled OurGlassZoo to invest strategically and sustainably in its media profile and market presence as an emerging local band. “We were also able to obtain new band photos, and collaborate with an experienced marketing company, which led to interviews, blog features, presence on Spotify playlists, and even presence on the radio,” he says. “A potential music video for ‘Free’, as a single, is also a future possibility.” 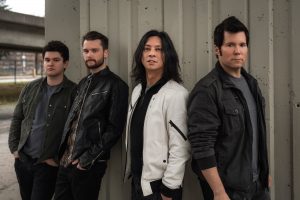 The band in Vancouver, BC.

Beyond this anticipated growth, 2022 Career Development support for OurGlassZoo has also manifested in outcomes that were unanticipated, but equally timely and opportune. Chief among them has been the opportunity for the group to collaborate with KutMusta Kurt, who is known for remixes for acts such as Linkin Park and the Beastie Boys. The band is currently working with him, alongside JUNO Award-winning hip-hop artist Moka Only, on a remix of ‘Free’, to be released later this summer.

When asked to reflect and comment on the musical and stylistic influences that have shaped both Aftermath’s development and launch, and OurGlassZoo’s artistic trajectory on a whole, Josias considers, and notes, “I have an electronic music background, and I listen to a lot of film soundtracks. Bands such as Sigur Ros have inspired me to write; I’m also influenced by great lyricists and bands that blend genres. Other, more commercial inspirations include Radiohead, Muse, The Killers, M83, KOL, Bon Iver, Young and the Giant, and Nothing But Thieves, among others.” 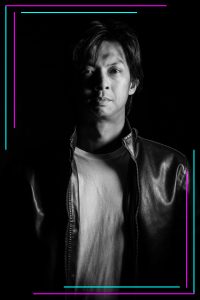 “I’m a bit more old-school,” Garrett counters. “I like the study of vocal harmonies from The Beatles, or Emitt Rhodes; psychedelic rock like David Bowie and Todd Rundgren, and even some harder guitar influences like Guns N’ Roses or Megadeth. Due to our different musical backgrounds, we bring interesting and oxymoronic ideas to the table. We like to challenge ourselves to create an amalgamation of genres that we like, and find a nice balance to them. The [Creative BC] grant allowed us to experiment more [to this end], because it provided us with more hours in the studio.”

While both Josias and Garrett take pride in OurGlassZoo’s continued evolution, they also acknowledge that the path to success can be a long and sometimes-iterative one. When asked to consider what advice they might offer other musicians and artists considering applying for a grant from Creative BC, or another funder, they reflect, and offer:

“If your vision for your music and your brand is authentic, people will connect with you. You must have a clear understanding as to who you want to be as an artist, and what you want to convey.”

More pragmatically, they also note that ” … the staff at Creative BC are extremely supportive, and will guide you through the process by answering questions, and also offering online sessions about your grant submission. Do take advantage of that. If the application fails for any reason, find out what went wrong to prevent yourself from repeating the situation.”

Both Josias and Garrett also underscore the values of tenacity and persistence in the process of seeking and applying for grants. “When our first application was declined, we were disappointed, because as more time was spent filling out multiple forms, the higher the hopes became. The staff at Creative BC took the time to provide us with relevant feedback on how we can improve our chances, which resulted in two grants in a row – one for production, and this latest one for marketing! Be open to feedback and criticism, as it will help [to] shape your application, and also give you the opportunity to grow: both as an artist, or in a band.” 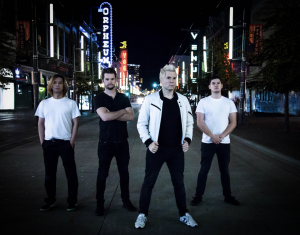 OurGlassZoo on Granville Street, in downtown Vancouver, BC.

All images and artwork courtesy of OurGlassZoo.