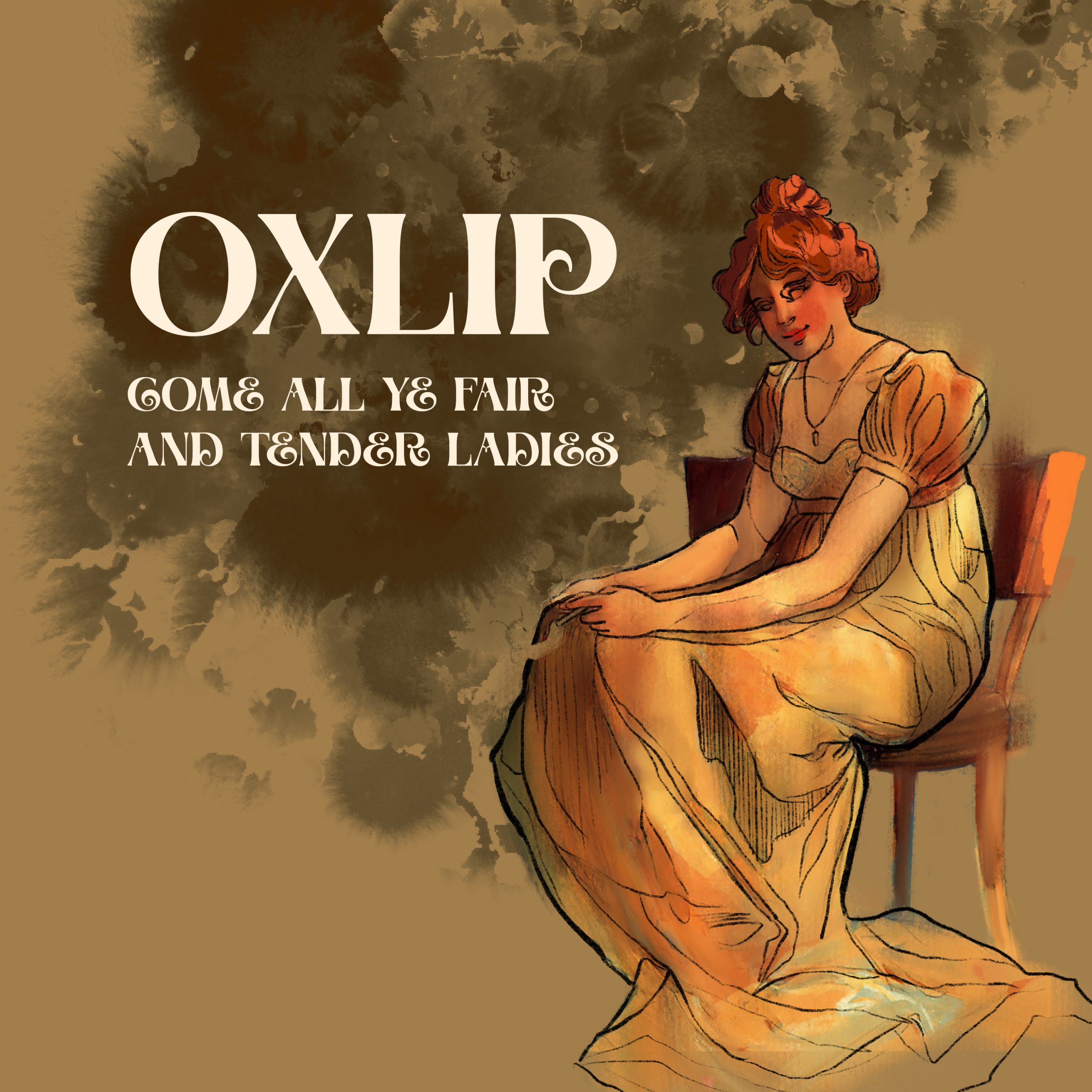 OXLIP is Northern Irish-born singer-songwriter Jayne Trimble’s moniker for the stage. The name is inspired by wildflowers and woodlands evocative of the darkly-windswept British Isles, alongside a host of literary archetypes ripped straight from the Brontë era. OXLIP has been creating intricate musical worlds in similarly-windswept and coastal Vancouver since 2012. As an artist, she’s inspired by music’s restorative properties as much as she is intrigued by the intricacies of the natural and metaphysical worlds, paradoxes in classical literature, and the complex legacies of Victorian-era gender politics. 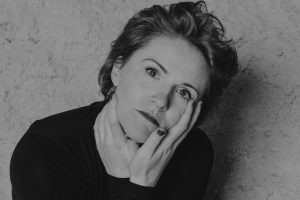 Promotional art for Come All Ye Fair And Tender Ladies.

Thanks to Amplify BC’s Career Development program in 2022, OXLIP has indulged these curiosities through the development and release of Come All Ye Fair And Tender Ladies, a studio album that unifies traditional European and North American folk songs with abstract psychedelic elements. This hybrid approach wrests these pieces from the realm of artifice into fresh relief for contemporary listeners. Named for the eponymous American folk ballad first heard in the Appalachian region (and made famous through later covers from Peter, Paul and Mary, Pete Seeger, and Joan Baez, among other 20th century mainstays), the tracks themselves are ethereal and spare. Sitting somewhere between hymn and madrigal in style, they are also largely characterized with the warm sounds of the banjo, the mandolin, and the acoustic guitar, alongside the quiet presence of an organ and synth continuo. Career Development funding has supported the album’s engineering, production, and mastering, alongside the development of artwork and promotional photos in support of its launch. The album – OXLIP’s fifth – saw a mass-market release on May 27, 2022.

As a largely self-produced multi-instrumental musician, and as comfortable in the realms of folk and traditional music as she is with ambient soundscapes and indie rock, OXLIP is no stranger to projects that challenge boundaries, cross-pollinate audiences, and interrogate the tensions that lie between the concrete and abstract elements of the human experience. Her deceptively-simple hymns and folk songs are engineered to trigger nostalgia and sentiment; her more avant-garde and experimental projects invite reflection on deeply visceral themes like love, death, sex, and loss. No matter the setting or context, however, OXLIP’s intention is for her work to evoke real reflection and open-hearted response in her listener.

“I create music because of the healing, transformative power I believe it has,” she says. “Music is deeply personal for me. Since the age of 30 – I’m now 38 – I’ve been on a healing journey that music has been a big part of. My voice and my music have gone from what I perceive to be unsure and insecure-sounding to fully embodied and empowered. I know that this energy is transmuted sonically to the listener when they hear my music. That’s really exciting to me!” 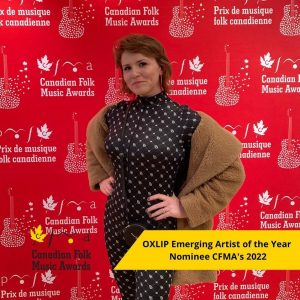 Come All Ye Fair And Tender Ladies’ arrival as a new album marks the crest of a period of sustained career momentum for OXLIP. Earlier in 2022, she received an Emerging Artist of the Year nomination at the Canadian Folk Music Awards in support of her sophomore release, Your Mother Was A Peacock, which offered a folk music-infused platform for stories that explored the recurring archetypes throughout art and literature surrounding ‘women as scapegoats’. Shortly thereafter, the title track from OXLIP’s fourth album – A Kind of Premonition – saw a feature within the fifth season of MTV’s acclaimed Ex On The Beach series. In recent years, she has also enjoyed concurrent visibility in the North American and UK press, with profiles, interviews, and features on BBC Radio, the Just Us Folk radio program, and CBC’s The Next Chapter, among other platforms. OXLIP is also the CEO and founder of a boutique recording studio and record label for women, World Peach Records. 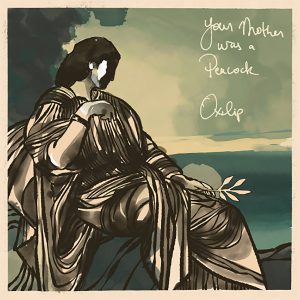 Your Mother Was A Peacock album artwork (2021).

As a songwriter, OXLIP’s efforts are informed by an alchemy of classical mythology, folklore, and the lasting legacies of Victorian-era social conventions. In both live and studio settings, she blends carefully-considered aesthetics with taste, style, and an artisan’s skill. Over time, much of OXLIP’s music has been characterized by strong themes associated with women, and their representation in historical fiction. As she elaborates, “I trained as an actress in London and Moscow, and I have a great passion for classical literature. A lot of my inspiration stems from these sources. I write a lot from the perspective of women throughout history who could not – or, who cannot – tell their stories, and I care deeply about equality and freedom for women. That theme comes through a lot in my music.”

Widespread audience appreciation for OXLIP’s efforts to weave thoughtful storytelling and social justice elements into her commercial output has bolstered her career trajectory. This approach has enabled OXLIP to feed her own personal passions and curiosities while shrewdly growing existing and new audiences. When invited to reflect on those moments that have represented the most significant catalysts to current success, OXLIP returns to her recent nomination at the Canadian Folk Music Awards for Peacock as something particularly elemental. She recalls, “This was such a pivotal moment for me: the first time I’d ever had recognition to this degree for my work! It was very validating, and I very much enjoyed going to Prince Edward Island for the awards ceremony earlier this year.”

Despite coups like these, however, OXLIP keeps perspective on the formative efforts and experiences that have enabled her career to take flight. She continues, “But, all of the projects and hard work leading up to [the nomination] were all really important in their own ways. My music career has been a long, slow burner, but it’s also felt like investing in the stock market: there’s compound interest, and eventually, it builds on itself, and becomes rewarding. I’m proud of how I’ve carved out my own path, and not accepted defeat from setbacks. There is a confidence that develops over time, and this can’t be bought or learned overnight. So, that feels good.” 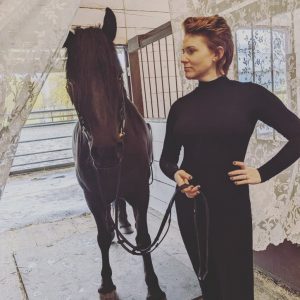 OXLIP at the Old Southland Stables, preparing for a photo shoot associated with Come All Ye Fair And Tender Ladies.

When OXLIP takes inventory of the attributes that have informed her successes, perseverance, resilience, generosity of spirit, and tenacity emerge as natural watchwords. Why? She quickly cites her producing partner: the longtime songwriter and indie artist Damien Jurado. Beyond his service as a musical contemporary, Damien’s iterative approach to music – one that, often, intentionally prioritizes process over product – has markedly shaped OXLIP’s own strategies. As she explains, “Damien has steadily built up his audience over years and years of hard work and persistence: he just celebrated 25 years in the industry! Getting to chat with him about life and music in LA while he produced an album that I had recorded was amazing. There was so much kinship and identification with him as a person, and his [way of working]. He has become, for me, a mentor, as much as [he’s] my producer.”

As OXLIP’s musical and creative stars continue their dual ascent, she remains mindful of ways in which she can continue to inspire others contemplating a similar creative path. This extends to sharing her tactics for securing the support that fuels these goals. When asked to reflect on what advice she’d offer to those contemplating a Creative BC funding opportunity, her response is simple.

“I’d say to just go for it! Many people have asked me for tips and advice about grants at Creative BC. And I always say, ‘Creative BC wants to support you: they’re looking for opportunities to be part of your career – so, be honest, and don’t overcomplicate your application.'”

OXLIP concludes, “I’ve attended [many] grant info sessions, and one thing has always been clear: they don’t [ask for] or need fluffy answers. Bullet points are fine, and that’s really refreshing, as not all of us are experienced grant writers!”

Come All Ye Fair And Tender Ladies can be purchased here.