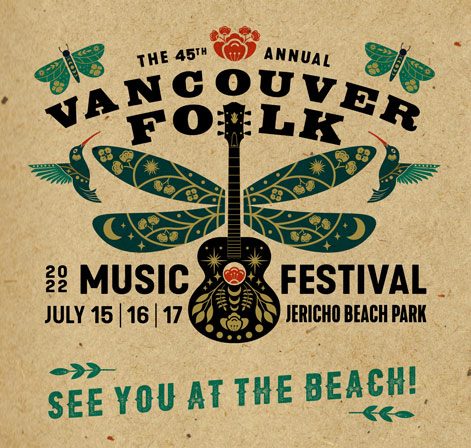 The Vancouver Folk Music Festival is a Canadian cultural institution. It is a unique community-based celebration internationally renowned for presenting the finest traditional and contemporary folk and roots music from around the world. Now in its 45th year, the Festival continues to be one of the city’s most beloved, enjoyed, and respected events. Through the years, the Festival has won “Best Local Music Festival” by readers of the Georgia Straight and the Westender. Each year, the Festival draws more than 40,000 enthusiastic attendees to beautiful Jericho Beach Park. Two and even three generations of families join friends and fellow community members to experience the music and culture of more than 40 international, national, and local acts. They come together to dance and to enjoy food and children’s activities – and the magical ambience of the Festival.

The Festival was founded in 1978 and held in Stanley Park. It relocated to Jericho Beach Park in its second year. Following initial sponsorship from the city, the Festival came under the control of the newly established non-profit Vancouver Folk Music Festival Society in late 1979. In the Festival’s early years, it established and ran its own record label and distribution company, Festival Records.

Over the years, the Vancouver Folk Music Festival has played a key role in the development of artists and audiences on a regional, national, and international level. The society continues to honour the same traditions with an emphasis on emerging and diverse artists.