Creative BC announces $820K to recipients of Production Program 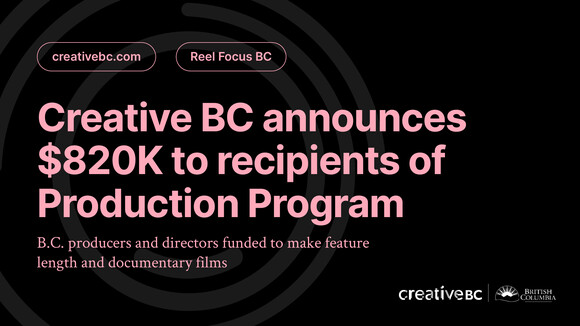 Vancouver, BC (December 22, 2021) – Creative BC is proud to announce 12 recipients of production stage funding through the organization’s first Production Program (the Program) since 2003. Part of the Reel Focus BC suite of programs, these producers and directors are benefactors of the Government of British Columbia’s 2020 two-million-dollar ($2M) investment into a new Domestic Motion Picture Fund (the Fund) through the Ministry of Tourism, Arts, Culture and Sport.

“We are fortunate to have a wealth of creative talent and infrastructure in B.C,” said Bob D’Eith, Parliamentary Secretary for Arts and Film. “It provides opportunities for people to tell diverse stories that may not otherwise have been told. We heard from the sector how important these grants were, especially during the pandemic, and we're proud to answer that call to action with re-instating this game changing Production Program."

The recipients’ new financing assistance will support the production phase of their longer form projects, including scripted feature length films and documentaries, allowing B.C. filmmakers to ready their projects for broadcast, sale and distribution. Importantly, all recipients of the program are B.C. resident individuals or B.C.-owned and controlled production companies and own the intellectual property behind these projects.

“The support we have received from Creative BC allows my producing partners and I to remain steadfast in our commitment to bringing together the brightest Canadian talents in order to tell this universal story,” said Marie Clements, Producer/Director. “We are so grateful for the constant dedication of the team at Creative BC in the telling of this story of resilience and hope.”

A significant feature of this program was to ensure a more inclusive approach to accessing funds, with the barrier of a secured market trigger removed (proof of existing financing through a distributor or broadcaster). The result is support for creators at a variety of career stages, and a mixed slate of projects that do and do not have existing market trigger financing, with many now given the opportunity to leverage this grant in securing further investments.

“This program’s investment into the production phase of filmmaking is a milestone for this talented group of B.C. creators and the projects they put forward,” said Prem Gill, CEO of Creative BC. “I congratulate the recipients of this highly competitive program, and I’m thrilled to see such funding made available again in the province—it reflects not just a belief in the value of storytelling, but in the voices of our own talent bringing a distinctly B.C. point of view to audiences everywhere.”

The following is the list of successful recipients, representing the second round to be announced under the B.C. government’s $2-million investment in Reel Focus BC:

CURL POWER is a coming-of-age feature documentary that follows an all-girl team in their quest to overcome self-doubt and earn a spot at the National Curling Championships.

Cree Matriarch Aline Spears is confronted by her traumatic past as she embarks on a classified mission in World War II, realizing the devastating secrets long buried in her are shared.

After a night of unexplainable cosmic phenomena, an inquisitive young girl, her angsty teenage brother, and self-righteous father put their family life aside in the face of a pandemic alien invasion.

Ordinary drug users, activists and police caught in extraordinary circumstances – manifested by a piece of draconic legislation that provides for setting up places of detention, commonly known as prison parks.

5.     Project: The Reclamation of Steve Joe

A down-on-his-luck First Nations Archeologist seeking redemption teams up with a group of misfits from the Rez to break into a museum and reclaim sacred artifacts that rightfully belong to their people.

In a world desperate for hope, The Art of Dance ignites inspiration and dares us to come alive by tracing the evolutionary healing power of indigenous movement, music, culture, and community through a cinematic documentary experience.

A portrait of the trials and tribulations of a fragmented, immigrant Korean family seeking out the Canadian dream in the prairies.

A documentary series set in the future we need to create for a just and livable planet.

The son of a real estate tycoon sets out to save the local Chinatown diner / Asian hip hop club that his father is trying to destroy.

An intimate look at our national sport through the young hockey players of the South Asian community of the Lower Mainland, BC. Only a few will get to the next level so the drama is high; not just for the players, but for their families. This is Hoop Dreams on Ice!

PLANET 911 will demonstrate how to prepare, respond, recover, and mitigate during this “Age of Emergencies” through a surprising and diverse cast of women – front-line responders, trauma experts, artists, public leaders, and emergency preppers.

An inspiring story following Logan Redcrow – a Siksika woman, the horses, the team, the land and water that takes care of them, and the generations of her family that have trained for decades for her to race at the Indian Relay Championship of Champions.

Creative BC is an independent society created and supported by the Province to sustain and help grow British Columbia’s creative industries: motion picture, interactive and digital media, music and sound recording, and magazine and book publishing. The society delivers a wide range of programs and services with a mandate to expand B.C.’s creative economy. These activities include: administration of the provincial government’s motion picture tax credit programs; delivery of program funding and export marketing support for the sector; and provincial film commission services. Combined, these activities serve to attract inward investment and market B.C. as a partner and destination of choice for domestic and international content creation. The society acts as an industry catalyst and ambassador to help B.C.’s creative sector reach its economic, social, environmental and creative potential both at home and globally. Website: www.creativebc.com