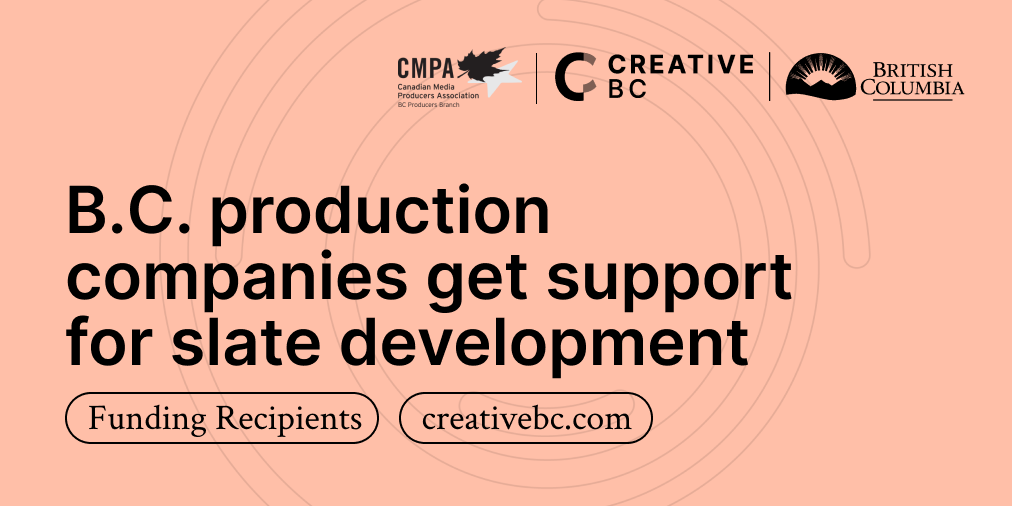 Vancouver, June 15, 2022 | Creative BC and the Canadian Media Producers Association, BC Branch (CMPA-BC) are proud to announce the six B.C. businesses receiving a total of $270,000 through Creative BC’s Slate Development Program (the Slate Program).

Part of the Reel Focus BC suite of programs delivered by Creative BC, the Slate Program is designed to meet the domestic industry’s need to build local capacity and compete nationally and internationally to seize business opportunities in the growing film and TV industry.

The Slate Program delivers $220,000 in grants through the Province’s $2M Domestic Motion Picture Fund. With this funding, the B.C. government helps local production companies move forward on multiple projects, attract investment and leverage federal funding. The additional support delivered to recipients is for business capacity-building, sparked through a collaboration with the CMPA-BC.

The following is the list of the successful B.C. companies creating 100% domestically owned and controlled creative content, each of which receives a contribution of $45,000:

All six companies are developing bold and innovative work that can compete to attract interest and investment from national and international decision-makers. The Slate Program contributes to each company’s total funding envelope to support development stage costs for two or more projects, one of which must be a scripted television series intended for broadcast or streaming / video-on-demand (VOD) platforms.

The CMPA-BC capacity-building initiative will allow recipients to bring in a professional consultant or service provider to level them up in a key area of producer or company growth. This may include engaging a mentor, lawyer, accountant, business affairs expert, workshop facilitator, or creative consultant. In addition to this individual support, recipients will have access to group workshops or events and peer networking facilitated by Creative BC and the CMPA-BC. The strategic aim is to support longer-term success through business acumen, skills development, and corporate growth.

QUOTES:
Honourable Melanie Mark, Minister of Tourism, Arts, Culture and Sport
“Our government recognizes that enhancing local businesses’ capacity to produce and market B.C. based content is essential to giving B.C. a competitive edge in the T.V. and film industry worldwide. These grants will provide local production companies with the financial support that B.C. filmmakers need to move multiple projects forward, capture the attention of investors and secure additional funding, all of which is an essential part of building a strong domestic motion picture industry.”

Prem Gill, CEO, Creative BC
“Building a strong core of B.C.-based production companies is essential to our provincial film and television industry. These mid-level and established businesses demonstrate creative and strategic capacity. Creative BC’s support through provincial grants will help them continue to adapt to changing business contexts, create jobs, and originate dynamic, made-in-B.C. stories for the screen.”

Tracey Friesen, Managing Vice President, BC Branch, Canadian Media Producers Association
“This is a stellar list of B.C. companies and we can’t wait to roll up our sleeves to support their success. CMPA-BC is keen to see more locally created – and locally owned – drama shows produced in B.C., and slate development is key. The Province’s Domestic Motion Picture Fund, administered by Creative BC, is a powerful force for good, and so necessary in this internationally competitive landscape.”

Erin Haskett, President, Executive Producer, Lark Productions Slate Program recipient
“We’re thrilled to be able to utilize the Creative BC Slate Program to help drive Lark’s ambitious slate of scripted properties, further develop B.C. based talent and stories while also growing the company during this shifting market. This valuable support helps Lark scale up for new opportunities in the transformable television landscape ahead of us.”

About Creative BC
Creative BC is an independent society created and supported by the Province to sustain and help grow British Columbia’s creative industries: motion picture, interactive and digital media, music and sound recording, and magazine and book publishing. The society delivers a wide range of programs and services with a mandate to expand B.C.’s creative economy. These activities include: administration of the provincial government’s motion picture tax credit programs; delivery of program funding and export marketing support for the sector; and provincial film commission services. Combined, these activities serve to attract inward investment and market B.C. as a partner and destination of choice for domestic and international content creation. The society acts as an industry catalyst and ambassador to help B.C.’s creative sector reach its economic, social, environmental and creative potential both at home, and globally. Website: www.creativebc.com

About CMPA-BC Producers Branch
The Canadian Media Producers Association is the national advocacy organization for independent producers, representing hundreds of companies engaged in the development, production and distribution of English-language content made for television, cinema and digital media channels. We work to promote the continued success of the Canadian production sector and to ensure a bright future for the diverse content made by our members for both domestic and international audiences. The BC Producers Branch (CMPA-BC) is a provincial chapter of the CMPA, working on behalf of British Columbia production companies. Website: https://cmpa.ca/cmpa-bc/

Brightlight Pictures is currently working on a variety of film and television projects including Firefly Lane Season 2, and the critically-acclaimed drama series The Good Doctor for ABC and Sony Pictures Television, which was recently named the most watched television series in the world at the Monte Carlo TV Festival in 2018.  Brightlight is also currently working on feature film FLOAT, and a new TV Series for Nickelodeon Monster High. Learn more.

Cedar Island Films, est. 2018 | Cedar Island Films, based in Vancouver, produces documentaries and dramas as features and series with a strong focus on collaborative partnerships, locally and internationally. The two principles, Henrik Meyer and Andrew Williamson, have the privilege of successfully producing film, television and digital media content for many years. With this wealth of experience, they are now focused on building on their work with filmmakers who may not have the same access to funding and audiences. Cedar Island is in development on a diverse slate of projects from exciting new voices, together with robust international partners. Cedar Island is passionate about creating content with purpose, particularly about critical and timely subjects like the environment, decolonization, inclusivity, social justice and LGBTQ2S+ issues.

Cedar Island’s latest feature documentary, THE MAGNITUDE OF ALL THINGS (NFB/Telus/Telefilm) by Jennifer Abbott (The Corporation) opened at VIFF 2020, won Best Canadian Feature Award at Planet in Focus and Audience Choice Award at DocLands in California. It also screened at RIDM (Montreal), IDFA (Amsterdam), Cinequest (San Jose) among many other festivals. They’ve produced THE SEARCH, a feature documentary for the CBC with Shaman Films plus three high-end television service productions. Their Canadian/German feature doc co-production THE WHALE AND THE RAVEN (ZDF/ARTE/NFB) won the WIFTV Artistic Merit Award at VIFF 2019 and is available on Amazon Prime. Learn more.

Driven to continue building and uplifting our local community of filmmakers, in 2020 EFF launched Forest for the Trees – an initiative focused on developing programs and grants that connect and support our creative community.  Learn more.

Imagine Create Media, est. 2013 | Imagine Create is an internationally acclaimed family entertainment company. We are creators and storytellers. Our purpose and passion is creating premium television, film, music, storybooks and digital content that is loved by children and grownups alike.

Over the past 25 years our leadership team has become expert in creating, financing, and producing family entertainment. Through strategic partnerships with broadcasters, financiers, distributors, licensors, brands and artists we’ve forged a reputation for delivering premium quality content that is entertaining, heart-centred, and universally loved.

Our work in digital and television has been recognized with the highest international honours for family content including being named a Prix Jeunesse Award, a Banff Rockies Award nomination, a Kidscreen Award, multiple Parents Choice Awards and a nomination for the prestigious NHK Japan Prize.

Lark Productions, est. 2010 | Established in 2010, Lark Productions is an award-winning television production company with a proven track record of producing exceptional programming in Canada for the global marketplace. Lark develops both scripted and unscripted content, often in collaboration with Universal International Studios, a division of the Universal Studio Group, through a first-look distribution deal. Lark is a vertically integrated production company with in-house scripted, unscripted and podcast development, business affairs, finance and post-production departments. Lark’s producing expertise spans across various provinces in Canada with a corporate presence in Toronto.

Omnifilm Entertainment, est. 1979 | Omnifilm Entertainment is one of Canada’s leading independent content companies. For over forty years, Omnifilm has produced and distributed hundreds of hours of award-winning programming including drama, comedy, factual and lifestyle series, documentaries, and children’s programming.?Based in Vancouver, Canada, Omnifilm Entertainment is a vertically-integrated content company handling development, production and post-production, delivery, and distribution of our brands on both traditional television and digital/VOD platforms.?The company partners are Michael Chechik, Gabriela Schonbach and Brian Hamilton. Learn more.